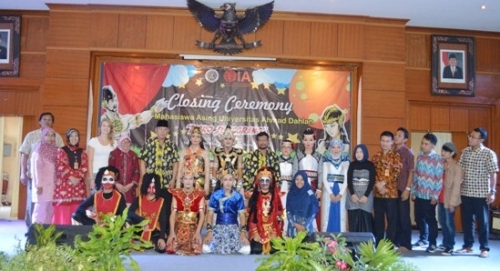 The Closing Ceremony of International Student Program was held at Campus I University of Ahmad Dahlan (UAD). The rector of UAD Dr. Kasiyarno, M.Hum and the chief of University Foreign Affairs (KUI), Ida Puspita, S.S., M.A. Res delivered their speeches in the event, which marked the end of the program.

Some 113 foreign students getting scholarships from different departments took part in the event. They come from China, South Korea, Thailand, and Ukraina 72 from Faculty of Economics double degree program and 31 from Faculty of Letters, Culture and Communication.

Kasiyarno said, ‘The number of foreign students at UAD is increasing. It means that UAD curriculum has developed.

The event with the local theme of Prambanan Temple’s Roro Jongrang presented a traditional performance. Some of the attractions were Chinese music and dance, traditional Thai dance, songs from Timor Leste, and many more. Apart from them Mo Weiran, a Chinese student sang an Indonesian song ‘Terima Kasih Cinta.’

Scholarship receivers and other foreign students presented a musical play Roro Jonggrang in the event.

Dinar added, ‘We are proud of them all. We hope they have their good prospect with their ability.’

Besides a musical play, they also presented Enggang dance of Kalimantan. The audience enjoyed the performances.

‘This is a moment to show the UAD’s foreign students’ language competence and culture. This event can give profound impressions to the students. It is hoped that they can introduce Indonesia through culture to their countries,’ Ida Puspita said.