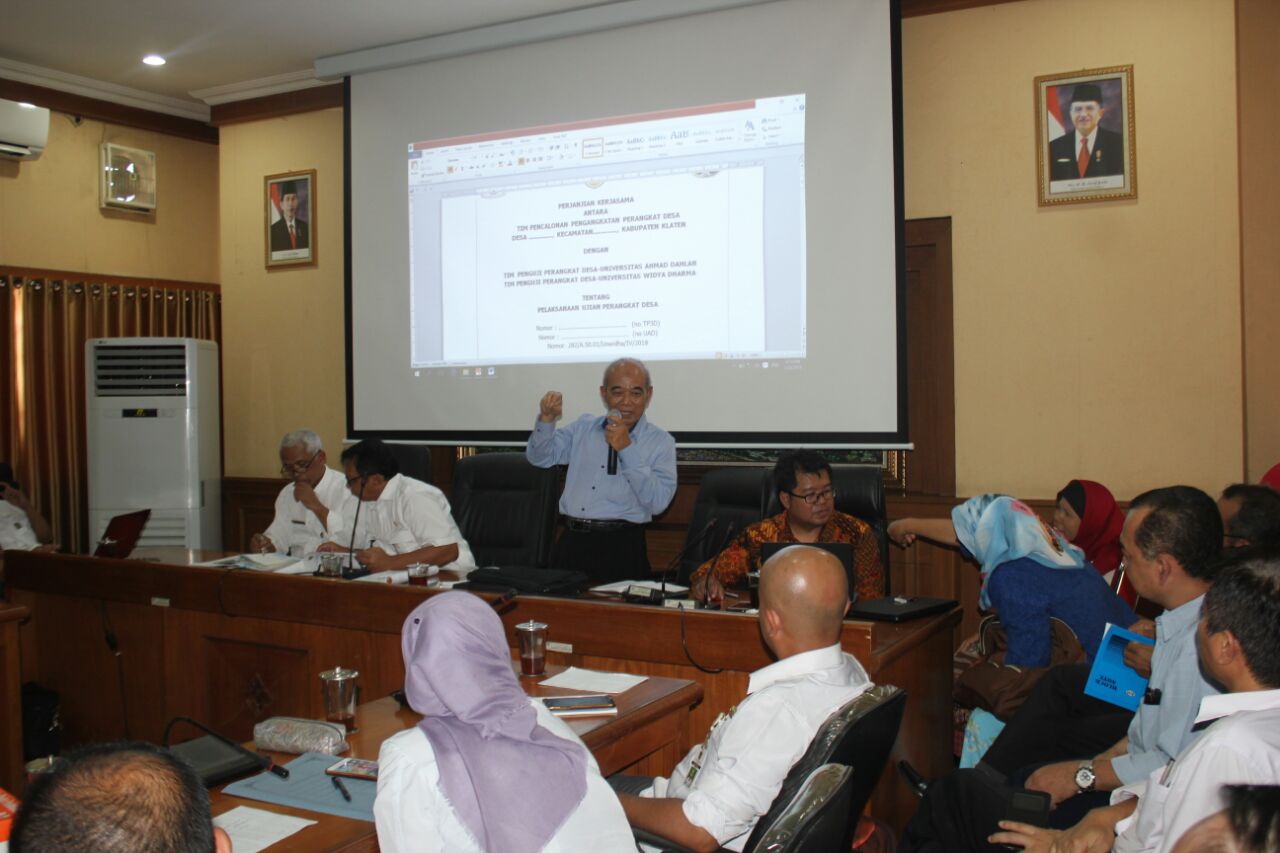 Local Government (Pemkab) of Klaten facilitates Tim Pencalonan dan Pengangkatan Perangkat Desa (TP3D) or Team for Nomination and Appointment of Village Authorities in Klaten Regency by cooperating with Ahmad Dahlan University (UAD) Yogyakarta and Unwidha Klaten. This cooperation is in order to organize the appointment for village authorities which is held simultaneously in 2018 in 391 villages in Klaten Regency. The registration for the event takes place from April 1-7 in TP3D of each village.

This information was delivered by Assistant I of the Regional Secretariat (Setda) of Klaten, Dr. Rony Roekmito, M.Kes., after leading a Coordination Meeting (Rakor) with UAD and Unwidha in Room B1 of Klaten Pemkab building on Wednesday (28/3/2018). This meeting was also attended by the Head of Rural and Community Empowerment Agency (Dispermades) Klaten, H. Jaka Purwanto, S.Sos., M.M., 26 heads of sub-district (Camat), and the Section Head of Klaten regency. There were also some representatives from UAD, including the Dean of Law Faculty, Rahmad Muhajir Nugroho, S.H., M.H. as well as several lecturers. Meanwhile, the representatives from Unwidha were the rector and his staff.

The selection test for village authority candidates consists of written exams and computer practice exams. The test will be conducted in each sub-district on April 29th, 2018. The results of the test will be announced immediately.

The test materials include Pancasila and the 1945 Constitution, knowledge of village governance, leadership, Indonesian language, Javanese language, general knowledge, and about society. The test is in the forms of 120 multiple-choice questions with 4 options for each question. The value for each correct answer is 0.5 with a maximum score of 60. The total score of the computer practice test is 40 with 15 as the maximum score for Microsoft Word, 15 for Microsoft Excel, and 10 for Microsoft.

Rony Roekmito expects all Klaten people who will register themselves as village authorities to be confident. He emphasizes that all the costs for the implementation of the appointment will be financed by the Village Government Budget (APBDes).

Megawati, S.H., M.Hum. is trusted the as Head of the Village Authorities Testing Team (TPPD) from UAD Yogyakarta. On the other hand, Drs. Purwo Haryono, M.Hum  is appointed as the representative from Unwidha Klaten. (ard / doc)

UAD was Trusted to Host the 4th Halaqah Scroll to top