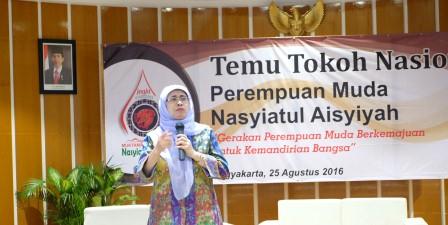 In the spirit of building brotherhood, motivating members, and finding inspiration, a meeting of young woman Nasyiyatul Aisyiyah national leader meeting was held coinciding a series of activities of 13rd Nasyiyatul Aisyiyah (NA) congress in Yogyakarta.

The meeting aimed at finding regional as well as national leaders’ ideas to improve the organization so that members of the congress can contribute useful ideas during the the four day congress.

Attended by some 200 participants, the event with the theme Young woman Movement for The advancement and Independent Nation ran well. Two speakers addressed their speeches. They are Prof. Dr. H.M. Amien Rais, M.A. and Dr. Rahmawati Husein, Ph.D.

The event was held at Hall of Islamic Center University of Ahmmad Dahlan (UAD) on South Ringroad, Tamanan, Banguntapan, Bantul, Yogyakarta last Thursday (25/08/2016). The event was managed by the chief of committee Normasari, S.H.,M.Hum, who was also the chief of 2011-2016 NA national leader board. The Vice rector II of UAD also gave a speech in the event.

Acting as the moderator of the event was Aryati Dina Puspitasari, M.Pd., a lecturer of Physics Education department. Amien Rais as the father of NA presented the equality between men and women. According to him, men and women share the same characteristics. The Holy Qur’an and Hadits say that men should protect women. So, men and women should have strong characteristics. It is the gender that man is praised but their knowledge and deed determine it,’ he said.

Amien Rais closed his speech with his message, ‘Don not raise discrimination in becoming members of Muhammadiyah. The most important thing in an organization is becoming functional, beneficial, and advantageous.’ (AKN)