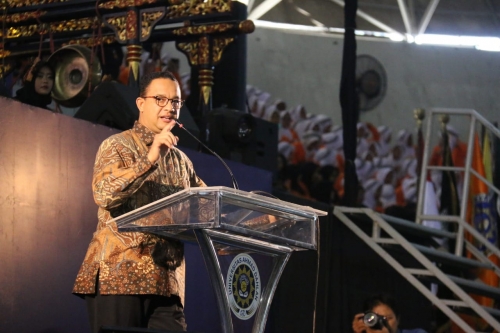 On Monday (08/27/2018) morning, DKI Jakarta Governor, Prof. Anies Rasyid Baswedan, Ph. D., delivered a scientific oration to participants of Student Orientation and Campus Recognition Program (P2K) of Universitas Ahmad Dahlan (UAD) at Among Raga Sports Hall, Yogyakarta. Anies said that college time was a period that we could not repeat, because it would be the asset for us to explore the world in the society.

"From the experience gathered in the university, we can learn to organize everything within ourselves and what we have learned will be the asset to explore the world in the society," he said.

He also advised that when we were a student, we should not delay our plans and waste our time while studying at the university. We must be a student who is academically outstanding, not to only be active in the classroom, but also outside the classroom, as well. This is in order to prepare ourselves in the future so that we can become human beings who have moral, competence, and literacy skills.

"Be the generation that participates in maintaining unity in Indonesia by  respecting and giving equal opportunities for others," he added. (dta)

UAD KKN PPM-Kemenristekdikti Produces Products with Economic Value from Was...