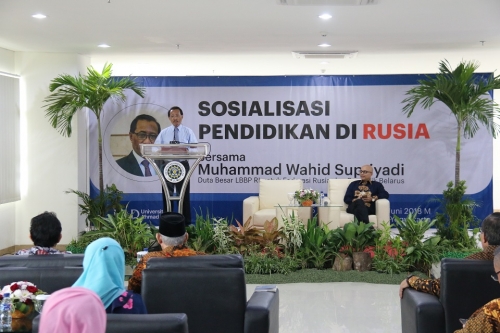 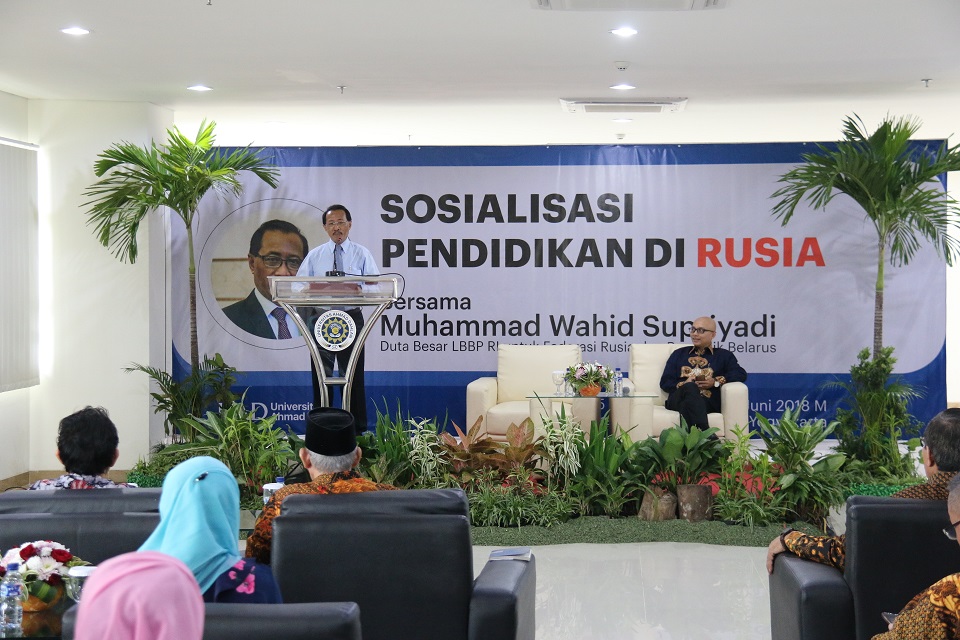 The Ambassador of Extraordinary and Plenipotentiary (LBBP) of the Republic of Indonesia for Russian Federation and the Republic of Belarus, Muhammad Wahid Supriyadi, provided education socialization at UAD. He talked about education in Russia and diplomatic relations between the two countries.

His presence at UAD was a follow-up of UAD's previous visit to Russia to establish cooperation with People Friendship University (RUDN) of Russia. RUDN is one of the 10 best Russian universities located in Moscow.

The event took place on the roof top of UAD campus 4 building, on Friday (29/6/2018) and was attended by UAD higher-ups and officials on the levels of university, faculty, and study program.

The Rector of UAD, Dr. Kasiyarno, M.Hum., in his speech said that UAD was continuing to develop cooperation with universities abroad. With RUDN, UAD signed MoU and MoA on the health sector. In the future, the cooperation would be extended into the fields of education and technology with universities in Russia.

"Currently, Russia is available to cooperate with universities in Indonesia. Moreover, the people are really interested in Islam. UAD gives an opportunity to five students from Russia to study at UAD specializing in Islamic studies," he explained.

On the other hand, Muhammad Wahid, in his presentation conveyed that Russia was currently a country whose Islamic population was growing rapidly. In a country with a population of about 146 million people, a lot of mosques were built.

"Russia wants to build good relations with Indonesia. Now, there are 500 Indonesian students studying in Russia. There are scholarships from the Russian cultural center as well as self-financing education," said Muhammad Wahid, who was born in Kebumen.

It needs to be noted that, each year, the Russian government provides scholarships for 160 Indonesian students. Muhammad Wahid stressed that it is important for Indonesian universities to establish cooperation with universities in Russia, especially in the field of engineering. (ard)