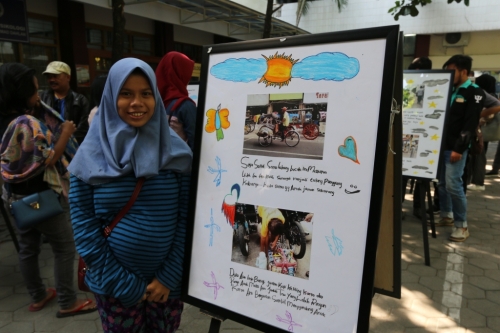 The Faculty of Psychology of Universitas Ahmad Dahlan (UAD) Yogyakarta, in collaboration with University of South Africa (UNISA) conducted a research on "Voicing and Empowering the Vulnerable Group through Indigenous Community Psychology". The implementation of this collaboration was a photovoice exhibition.

The first photovoice exhibition took place last April with female lecturers and staff of the Faculty of Psychology as participants. Meanwhile, the second one featured street children in Yogyakarta. Before displaying the results of the photovoice, the street children attended workshops for three days from July 9 to July 11, 2018.

The research was funded by LPPM UAD and involved lecturers from UAD and UNISA. Among them were Prof. Mohammed Seedat from UNISA, Dr. A.M. Diponegoro, Elli Nurhayati, Ph.D., and Dessy Pranungsari, M.Psi from UAD.

The subjects of the study were eight female street children in Yogyakarta and they were included as a part of the research team to determine the theme of photography and the preparation of photovoice works exhibition.

Elli Nurhayati, representing the researchers explained that the photovoice exhibition involved female street children to commemorate the national child's day on 23rd of July. "This activity is to see the other side of the lives of Indonesian street children. Many of them must be on the streets to survive. Some even have their own children. "

She emphasized that there was still a lot of things to do in Indonesia, especially concerning children. Street children have the right to get education and live well, just like children in general. She expressed her wish that with the photovoice exhibition, people would care more about street children.

The photovoice exhibition was held at green hall of UAD campus 1 on Jln. Kapas 9, Semaki, Yogyakarta on Saturday (7/21/2018) featuring eight street children aged 12-18 who worked every day at lesehan kopi jos, along the Malioboro street and the north town square of Yogyakarta.

These street girls have been introduced to photography and how to make narration. They also had daily matters discussion, photo taking practice, and photo discussion for the exhibition. In addition, these children were also invited to use photography as a tool to voice and convey issues that impact their lives.

From what she expressed, after making the narration and photographs, she was relieved, because she could share and showed her life on the streets to people. Mustika also enjoyed getting new knowledge, even though she and her friends only took pictures by using simple devices. (ard)