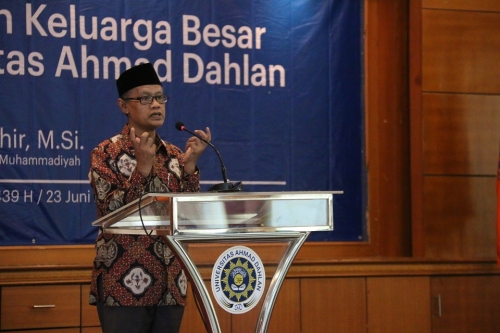 After a full month of Ramadhan fasting and Eid Al-Fitr holiday of 1439 H, Universitas Ahmad Dahlan (UAD) held a syawalan (a gathering event to apologize and forgive each other) attended by all lecturers and employees. In addition, there was also a release of 19 pilgrims from UAD.

The event that took place on Saturday (06/23/2018) in the auditorium of campus 1 UAD on Jln. Kapas 9, Semaki, Yogyakarta, presented a taushiyah (the broadcast of da’wah) by Dr. Haedar Nashir, M.Si., the Chairman of Central Board of Muhammadiyah. In his taushiyah, he conveyed the importance of actualizing the values ​​of better quality relationship in the family, society, UAD, in relation to religiosity and nationality. 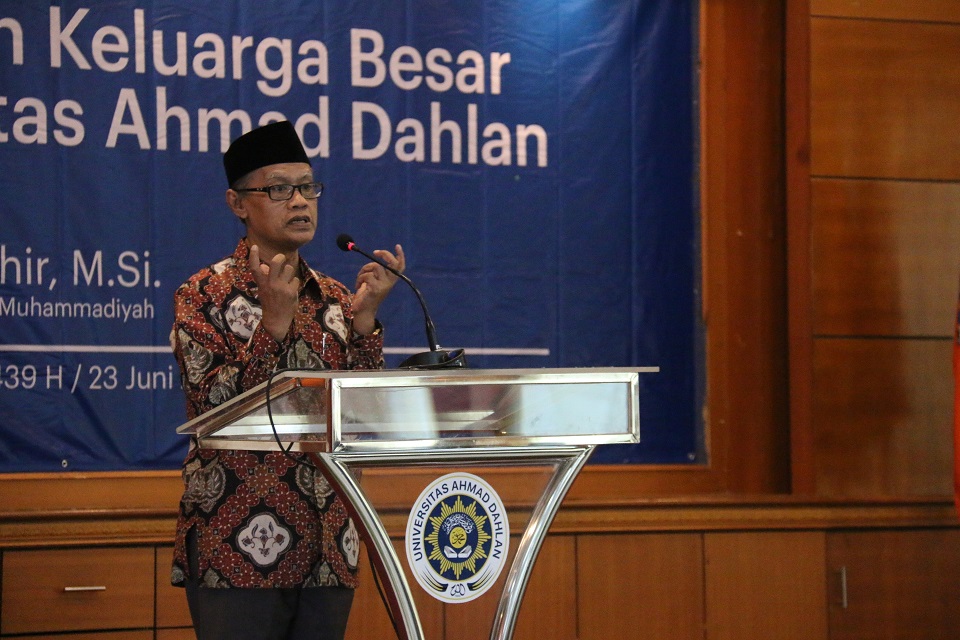 "Good relationship is a value that is always upheld and has become a collective culture. Its essence brings together brotherhood, whether tied together with biological or social relationships," he explained.

Haedar added that currently, maintaining good relationship can be done through social media. According to him, social media can be utilized as a means to share things about virtue.

"The negative aspect of social media is the exposure of bad character which should be avoided. Social media is often associated with freedom. This media may reproduce and produce many things that can trigger disintegration," he said in front of the invited guests.

On the same occasion, UAD Rector, Dr. Kasiyarno, M.Hum., mentioned the absence of lecturers and employees on the first day of work after Eid Al-Fitr holiday. He expressed his thoughts that the good buildings and facilities offered by UAD did not affect the performance of the employees for the better.

"The university needs to be managed well, especially since it is a private university. We must make extra efforts," said Kasiyarno.

He assumed that the work ethic at UAD should be improved for the university to be more advanced and known, both nationally and internationally. In addition, according to him, we had to pay attention to the students.

"UAD's revenues are still dependent on the students. The business owned by UAD has not been able to fully finance the university since it has just been developing. Therefore, lecturers and employees should treat students well. "

On the other hand, Dr. Bambang Supriyadi, C.E.S., D.E.A., the Chairman of Kopertis V, in his speech, expressed his expectation for UAD to add lecturer with doctorate degree to improve the quality of the university. Currently, UAD is one of the 68 universities that have been accredited A in Indonesia. (ard)

Lecturers Must Have Awareness to Write, Why? Scroll to top