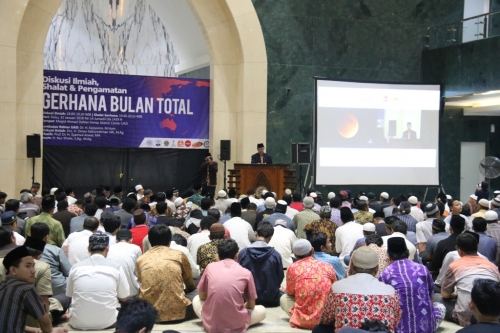 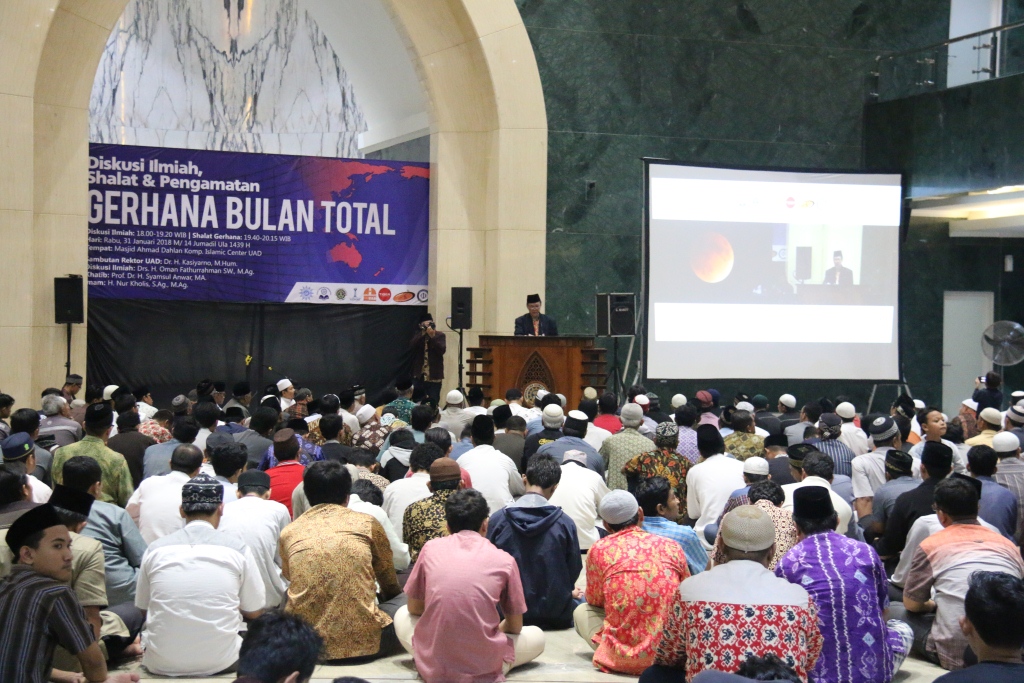 Ahmad Dahlan University (UAD) through Center for Astronomy Studies (Pastron) and Institute for Islamic Studies Development (LPSI) in collaboration with Majelis Tarjih and Tajdid of Central Leadership (MTT PP) Muhammadiyah held a scientific study and sunnah prayer on the event of lunar eclipse. The total lunar eclipse that occurred on Wednesday (31/1/2018) could be observed in all parts of Indonesia. It was started with penumbral lunar eclipse and ended with partial lunar eclipse. Overall, the lunar eclipse could last for more than 5 hours.

MTT PP Muhammadiyah stated that It is sunnah for muslims to conduct a prayer on the events of partial and total lunar eclipse, not including the penumbral lunar eclipse phase.

Rector of UAD, Dr. Kasiyarno, M.Hum., in his speech stated that such scientific studies will continue to be held, especially to support the development of science. In addition, according to him, the phenomenon of the lunar eclipse could be a moment to get closer to God.

"The phenomenon of lunar eclipses that occur today can be explained scientifically, do not associate it with superstitions or myths. On the other hand, there is the sunnah prayer which can be done by muslims on the event of lunar eclipse. This shows that science and religion have synergy. The event that was pioneered by Pastron and LPSI is a form of UAD's concern to educate the public," he said.

"It is not a matter of being visible or not, but lunar eclipse events that we can use as a reminder of Allah SWT.," He explained while presenting in the scientific study after conducting the sunnah prayer.

On the other hand, Yudhiakto Pramudya, Ph.D., Head of UAD Pastron, said that a number of telescopes prepared by Pastron could not be used because the sky was cloudy. However, Pastron anticipated it by showing a stream of lunar eclipse in the American continent.

Members of Hisab Division and Science and Technology of Majelis Tarjih and Tajdid PP Muhammadiyah of the period of 2015-2020 advised people to be fond of astronomy by reducing light pollution. (ard / doc)