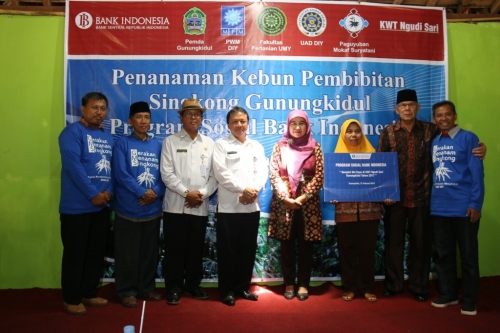 Gunungkidul Regency is one of the food supplier regions of Special Region of Yogyakarta (DIY). In the last 2 years, raw food materials such as cassava and sweet potatoes have been experiecing a decrease in production due to land conversion. Responding to this issue, Ahmad Dahlan University (UAD), with several agencies and institutions, work together to increase the production of raw food materials, especially cassava.

This cooperation is realized by planting high quality cassava seeds in Kemiri Village, Tanjungsari Sub-district, Gunungkidul on Wednesday (21/2/2018). Dra. Sudarmini, M.Pd., from UAD Institute of Community Service (LPM) and one of the initiators of processed cassava (mocaf) explained that initially this program was initiated by MPM PWM of DIY.

Sudarmini added, before the establishment of Food Technology study program, this program has been managed by LPM UAD and supported by students of Student Study Service (KKN). All UAD KKN students in Indonesia have a mocaf processing program.

"UAD has a role in assissting the community in the management of mocaf. In addition, there are many KKN students whose programs is to conduct a training on processing raw materials of mocaf to be nutritious processed products that have economic selling value," he said. (Ard)