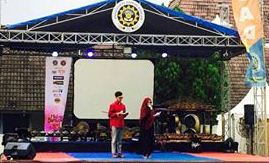 The area of Vredeburg Fort on Malioboro Street (area of Yogyakarta zero kilometer) was chosen as venue to hold an activity of Culture Night Carnival and Mass Setting-up Exercise (MBSR – Malam Budaya dan Senam Rakyat) by University of Ahmad dahlan (UAD). The event, which involved all academicians of UAD was held from Saturday to Monday (14-15/05/2016).

The MBSR event was a working program of Art, Culture, and Sport Department of Executive Board of University Student Body (SBO BEM – U). Together with other SBOs from different Faculties, BEM – U could hold the big event to introduce and develop culture to public.

Besides that there were interesting attractions from Tapak Suci Martial Art, stand Up Comedy Community, Rising Orange Champions, Kirana Bagaskara and also from Association of Muhammadiyah University Student (IMM) from 11 UAD Commissariat. There was also an art exhibition of painting, batik, and some other UAD students’ creative products.

Meanwhile, the Mass Setting-Up exercise, painting coloring championship for children, blood donor from representative of all UAD faculties were done on the following day, Monday (15/05/2016) involving all committee and public.

The choice of Vredeburg Fort as the venue of the event was meant to introduce regional arts and culture to foreign tourists as well as domestic ones. The event was also meant to promote UAD students’ entrepreneurship by opening stands to sell food, beverage and souvenirs. (AKN)