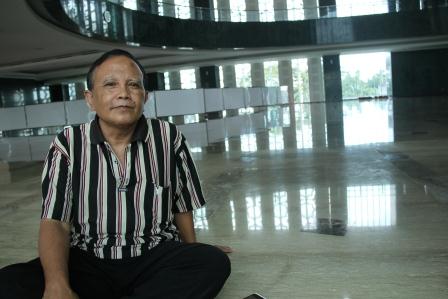 ‘University of Ahmad Dahlan (UAD) is popular in Gunung Kidul,’ said Joko Setiarjo as he was interviewed at the Mosque of Islamic Center Cmpus IV UAD last Thursday (23/06/2016)

The man, who swore to clean the UAD’s mosque if his daughter was accepted as lecturer, said that UAD often gives help to Aisyiyah Bustanul Athfal (ABA) kindergarten. It gives help in the form of fund and training to Gunungkidul people through Public Service Program (KKN).

Joko has known UAD since it was an institute of teacher training (IKIP) Muhammadiyah. UAD is one of universities, which develops fast and continues to expand its faculties. One thing, which makes UAD popular is its student achievement and alumni. Its alumni are found everywhere and takes their own roles.

Jojo fulfilled his promise to clean the mosque after his daughter was accepted as biology lecturer. For him being state or private lecturer is no problem.

Joko, who is a secondary school teacher at SMP1 Girisubo, Gunungkidul, completed his promise by keeping the mosque clean for a week.