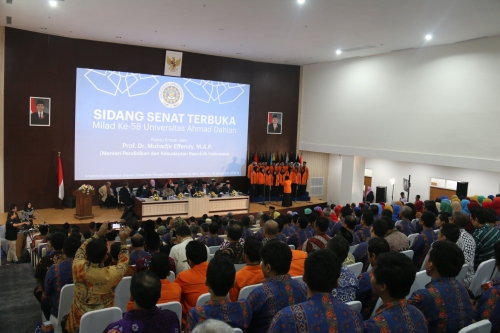 2018 Open Senate Session of Universitas Ahmad Dahlan (UAD) to celebrate the 58th Milad (anniversary) of the university scheduled the Rector Annual Report of 2018. On this occasion, the Minister of Education and Culture of the Republic of Indonesia, Prof. Dr. Muhadjir Effendy, M.A.P., was present to deliver scientific speech. The event which was held at the UAD Amphitarium on Saturday (12-29-2018) was attended by academic members and students of UAD, government officials, leaders and officials of PP Muhammadiyah, UAD partners, as well as the stake holders.

The Rector of UAD, Dr. Kasiyarno, M. Hum., in his annual report, highlighted several important matters. Some of them were related to institutional development, leading research center, business unit development, and welfare improvement.

"This Milad program is not only aimed as a tool to measure performance accountability, but also as an expression of gratitude to Allah SWT, who has given His gift, so that UAD becomes a higher education institution that gains trust from stakeholders and is able to make meaningful contributions to the nation," said Kasiyarno in his speech.

Currently, UAD is one of the leading private universities in Indonesia with A accreditation for the institution, which was obtained in 2017. There is a total of 48 study programs, 18 of them are accredited with A and 21 are accredited B.

"The increasing interest of foreign students to study at UAD indicates that the Muhammadiyah university has been recognized internationally. This is in accordance with its vision of becoming an internationally recognized university that is imbued with Islamic values," he explained.

Another thing that also deserves recognition is the increasing achievement of UAD students from year to year on regional, local, national, and international levels. Another one that we need to be proud of is that the Center for Integrated Research and Innovation (CIRNOV) of UAD managed to make Merapi Missile in collaboration with the Indonesian Army Dislitbang and PT Pindad.

In the field of education, UAD has established new school units (USB), which are a junior high school and a vocational school, that are used as a Lab School in Sambas Regency, West Kalimantan, one of the 3T regions with the funding obtained from the Indonesian Ministry of Education and Culture (Kemendikbud). In addition, in supporting the internationalization program of Muhammadiyah, UAD will build a Muhammadiyah school in Australia and Muhammadiyah Da'wah headquarter in Egypt.

The Minister of Education and Culture of the Republic of Indonesia, Muhadjir, expressed his pride in UAD that had paid attention to 3T regions. "In the era of industrial revolution 4.0, this region became the focus of the government realize education equity. So, there will be no regions that are left behind," he said.

In addition, Muhadjir said that he was happy with the current development of UAD. He expressed his hope that UAD would become a university that was ready for technological development and could support technological progress for the benefit of the nation.

On the other hand, the Chairperson of the Central Board of Muhammadiyah, Dr. Haedar Nashir who was present at the event said that Muhammadiyah universities had to become a madrasah (school) of thought. According to him, being a madrasah of thought could only be done by PTMs of class A, such as UAD. "In the future, UAD and Muhammadiyah must be the center of research as well as agents of change."

Haedar advised UAD and Muhammadiyah to be able to evoke the role of Islam that was able to acculturate culture in the midst of modern culture. Moreover, he advised them to improve advanced modernity, and strengthen progressive national integration. (ard)