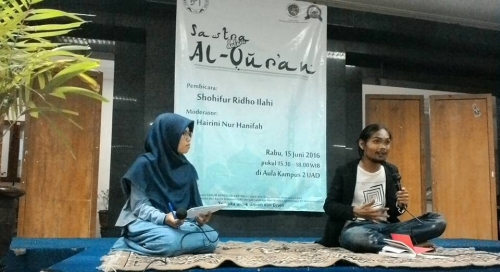 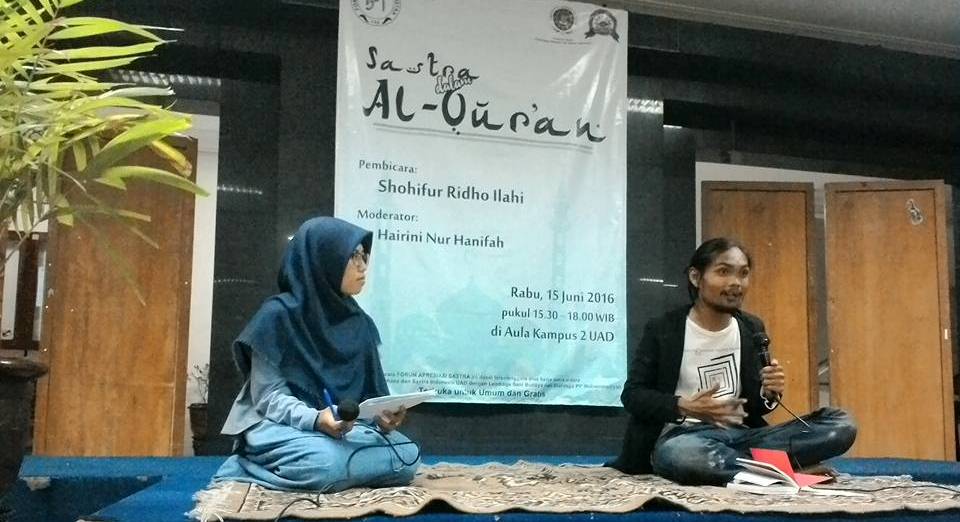 ‘Adonis once expressed his concern about the relationship between literature and religion (Islam). For the noted poet, who was born in Syria, literature and religion is like a coin’s sides. Literature is a question and religion is the answer. This statement is in accordance with Al-Qur’an Surah Asy-Syu’araa which says that Allah doesn’t like a poet so that He orders man to avoid the poet whose words are under command of Satan,’ said Shohifur Ridho Ilahi in a forum of literature Appreciation (FAS) #59 with the theme literature in Al-Qur’an last Wednesday (15/06/2016)

Furthermore, Ridho – his nickname said that on February 13th, 1993 HB Jassin an interview with Tempo magazine declared, ‘God surely likes no poet except the one who is a believer in God.’

Jassin statement at least opens a possibility of religious meeting in literature – that literature and religion are not contradictory but fills in each other to complete for the perfection.

Quoting the book Sastra dan Religiositas or Literature and Religiousity (1982), Y.B. Mangunwijaya opens his work with a simple but assertive statement, ‘At the beginning all literature is religious,’

‘This statement’ said Ridho ‘has abridged a meeting, which is difficult to understand and tends to be problematic, for literature (or arts in common) and religion.’

According to the Madura born poet, literature is a creative activity, which requires freedom as a prerequisite while religion tends to be doctrinal, abstract, static, and formalistic which is potential to develop creativity sense in the life of arts especially literature.

The interesting discussion is a regular program held at Campus II in cooperation with Indonesian Education Department (PBSI) University of Ahmad Dahlan (UAD). Acting as the moderator was Hairini Nur Hanifah in the last discussion coinciding with ending of fasting together.