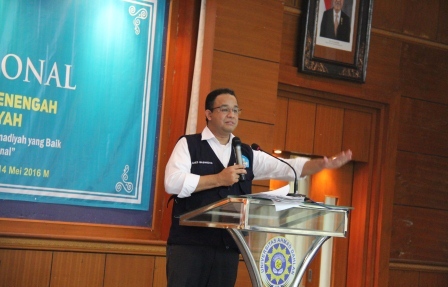 ‘Nowadays, schools are still in the mixed atmosphere, where the teachers and managers are in the 20th century atmosphere and the students are in the 21st atmosphere,’ The expression is adopted from the minister of education Anies Baswedan, Ph.D.

‘This situation requires the educational practitioners to carry out a reform,’ said Prof. Dr. Baedhowi, M.Si. a chief of Muhammadiyah’s Council of Basic and Middle Education at Campus I University of Ahmad Dahlan (UAD) Yogyakarta on Thursday (12/05/2016)

‘There are more than ten thousand Muhammadiyah schools including Islamic boarding schools all over the country. The number of educational institution is potential and valuable assets for Muhammadiyah organization as well as for the country in general,’ he continued.

Founded in 1912 by KH Ahmad Dahlan, Muhammadiyah has served education for the country since its foundation even before it.

Meanwhile, the secretary of the council R. Alpha Amirrahman, M.Phil., Ph.D. added that, ‘Muhammadiyah’s congress at Makassar from 18-22 Syawwal 1436 Islamic calendar or 3-7 August 2015 urges Muhammadiyah members pay special attention to strategic issues. In this case the council is expected to empower its education to be advanced, child friendly, secure, and inclusive, as stated in the result of the council’s workshop in Yogyakarta from 21-22 November 2015. By so doing the schools will be well managed to produce good outcomes to react the present challenges, which change fast. In the hope the educational institutions can be internationally reputed.

Based on the above ideas, there should be collaborative efforts to develop and manage the schools comprehensively. It is expected that the effects can fulfil people’s demand in accordance with science and technology as soon as possible. The above ideas underlie the National Workshop of the council, which was managed in cooperation with the ministry of education, where the minister delivered a speech. ‘This workshop takes the venue at Yogyakarta as a historical city of the birth of Muhammadiyah,’ Alpha Amirrachman concluded.

https://uad.ac.id/wp-content/uploads/images/stories/berita/Anies-Basweda-di-UAD-The-Need-of-Collaboration-among-Foundation-Teachers-and-Students.jpg 287 448 webmaster https://uad.ac.id/wp-content/uploads/logo-uad-akreditas.png webmaster2016-05-14 01:58:202016-05-14 01:58:20The Need of Collaboration among Foundation, Teachers, and Students